The Trip to Hokkido, Japan - Day 1

I joined a tour to Hokkido led by Rita and Paul during Oct 14 - 22, 2010.  I have rather mixed feeling about the trip, mixed with pain and pleasure. But such is life, never a perfect time 100% of the time. It took me a while before I feel like make a record of the trip.

We arrived Sapporo (a word derived from the Ainu - the indigenous residence of Hokkido meaning "a river running along a reed-filled plain") the evening of Oct 15 via connection in Narita Airport in Tokyo.  Following is a picture of the hotel we stayed. 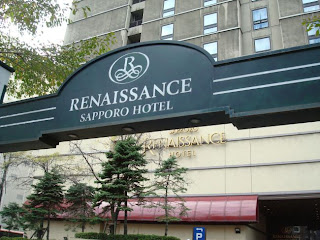 Early the following morning, Joan and I took a walk near the hotel.  I was intrigued to find a graffiti at the lower level by the river. 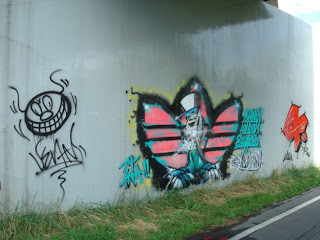 Otaru is a city and port northwest of Sapporo.  (within 25 minutes of drive).  It has some shopping malls along the canal that were converted from originally stone or brick built warehouses.  An old time charm is provided by the gas lamps along the canal. 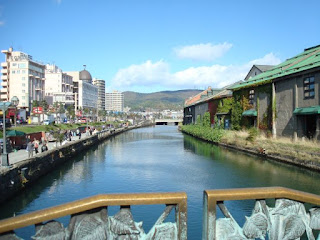 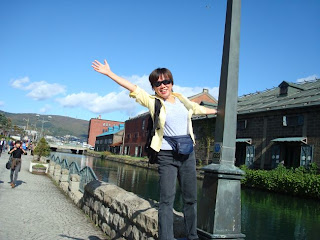 Otaru is famed by its glass works and music boxes. 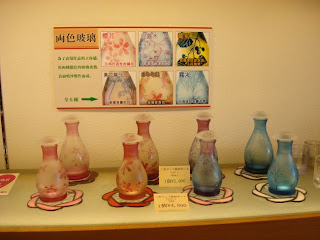 Posted by ChristinaH at 5:15 PM No comments:

I have been checking out on various live long learning opportunities that I might engage myself in after my retirement.  Shu-Jen was in Oxford in October, visiting with her husband Simon, was kind enough to obtain a copy of the brochure from Oxford's Internal Study Center. They have a very  attractive summer program.  One can live in the dorm of Oxford with meals included. One goes to classes, and all sorts of programs sponsored by the Center/University.  One can simply soak oneself in the atmosphere of that great teaching institute, and all!  But it certainly is not cheap.  5200 pounds not including air fare and spending money for 4 weeks.  I have to get myself ready (like reading up on a lot more books, etc.) before I can consider going and be able to get the most from the program.  Perhaps this can help motivate me in designing some more specific activities in 2011 in preparation for a possible trip in 2012.

Another interesting program is the Renaissance Institute at the College of Notre Dame in Maryland, which features a pear governed LLL. All members are 55 years old and up.  The annual membership is $385 which is more affordable, and the campus is just on Charles Street, Baltimore.  I can follow-up on this program and plan possibly join them in  the Fall semester, 2011.

I was able to visit Teacher Yen, my class (who taught us Math) teacher, Ms. Yen, when I was in Taiwan on Oct 31.  Teacher Yen, who with her younger sister and Mom moved to Taiwan in 1949, while her Father, and her second elder Brother stayed in Mainland.  Her Father instructed a student of his to take the three women to Taiwan for safety.  Her eldest Brother was a student in UK at the time, who actually was mad at Teacher Yen, because he thought she was the one wanted to go to Taiwan.  The three women were cut off from the rest of the family when Communists completely took over Mainland.  Teacher Yen held up the responsibility to find a job, and supported the Mother and the younger sister.  She had a very good teaching career at the First Taipei Girl's High School.  Her eldest Brother at 1950 tried to go back home, and was captured as soon as he arrived Hong Kong, as he was considered high value intellectual (he went abroad for education under the government, although it was the Kuo Ming Dong who awarded him the fund).  During the Culture Revolution, both of her Brothers tried to commit suicide as they could not stand the torture (being beaten and sent to far away farms).  Her second Brother died (he hang himself), but her eldest Brother survived as he could not kick off the Bang Dang underneath him.  After China removed the iron curtain, she was able to see her eldest Brother again, who had once scolded her for wanting to go to Taiwan.

Teacher Yen says that she was never afraid.  not when she was going to Taipei alone to look for a job, not when her husband died of cancer, not now in her 80's.  I guess she is a real tough lady.  BiFang is the classmate who works as a Pathologist in Taipei, a real smart, hard-working and kind lady. 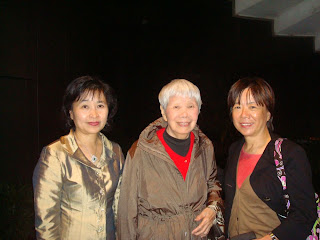