Pitigliano and the Etruscan Necropolis of Sovana

Pitigliano is a city built on sandstone (Citta del Tufo).  Etruscan settled here more than 7th centuries before Christ.  Around 394 BC, Etruscan started to decline.  Romans conquered one of the 12 capitals of Etruscan, and eventually ruled the land.  In 1550's, as a result of oppression and expel by the pope in Rome, many Jews moved to Pitigliano (at the time, the Orsini family was in control of the city), whose Catholic residents accepted them.  Between 1500-1600, one third of the residents in Pitigliano was Jews (more than 1800).  The city was called "Little Jerusalem".  In late 16th century, Orsini family was in debt, and the power was transferred to the Medici family from Florence.  Medici family created the "Jewish Ghetto", and started oppression of Jews.  Most of the Jews escaped from Nazi around 1943.  The current Jewish residents in Pitigliano is now only three, a Grand Mom, her son, and his son.  The grand mom was one of the 20 Jews who were hidden and rescued by their Catholic neighbors from the Nazi during the second world war. She was only a little girl just before the war.  (The one in the center of the picture). 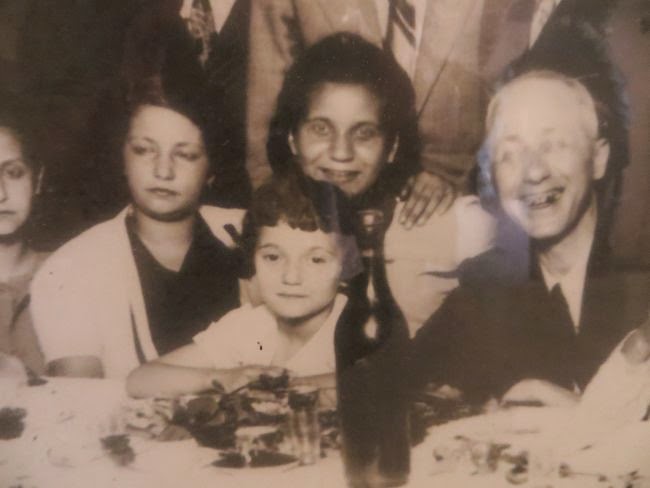 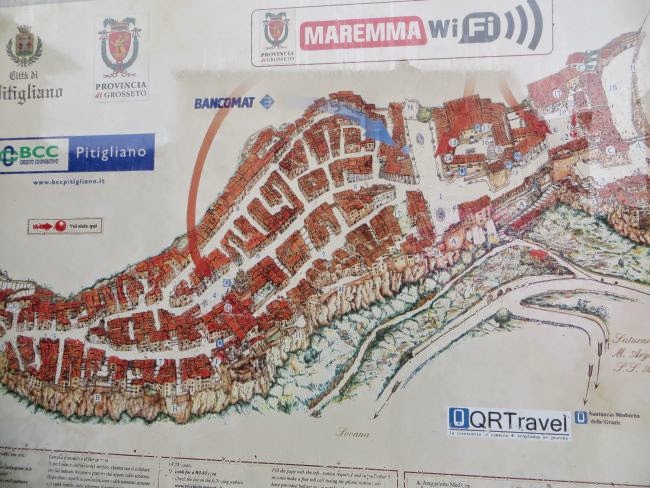 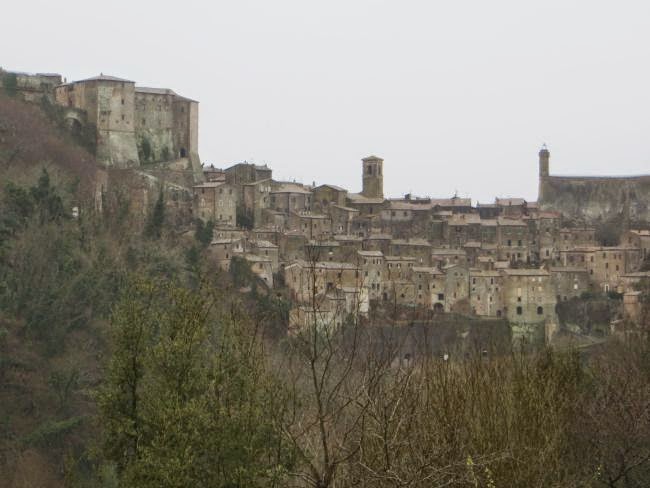 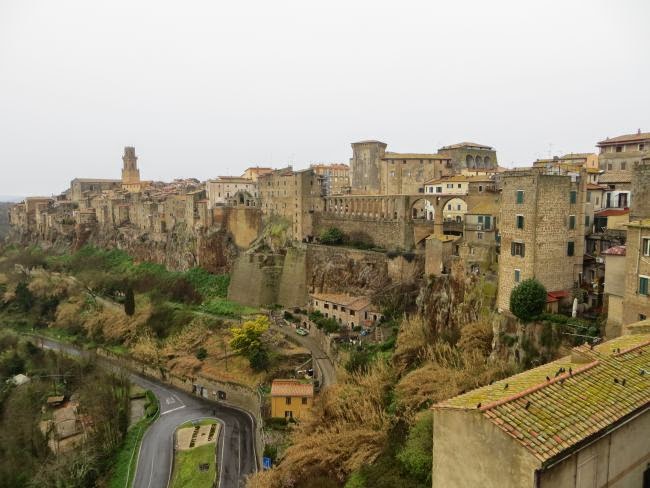 One can see the aqua duct built by Medici in the 16th century: 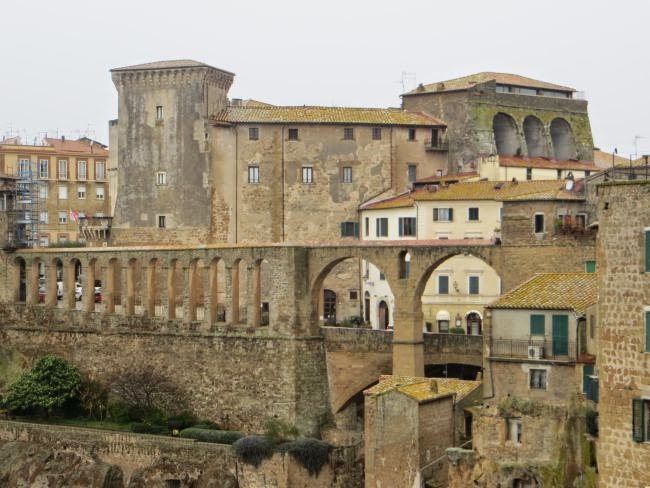 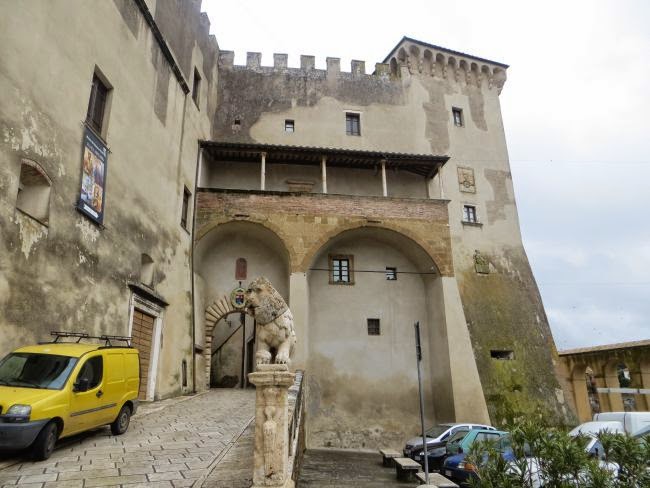 A bridge built above the moat going into the old town: 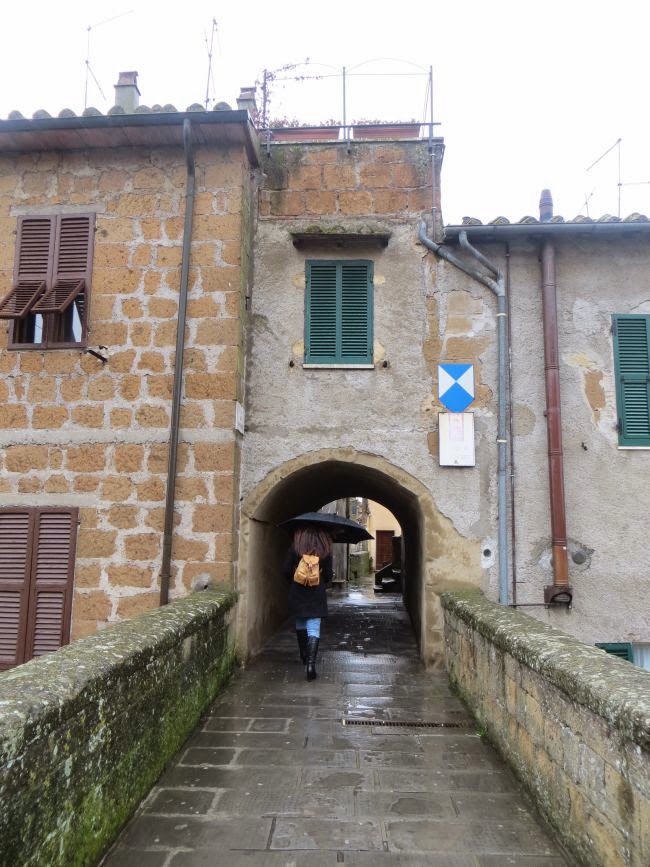 Part of the Jewish ghetto: 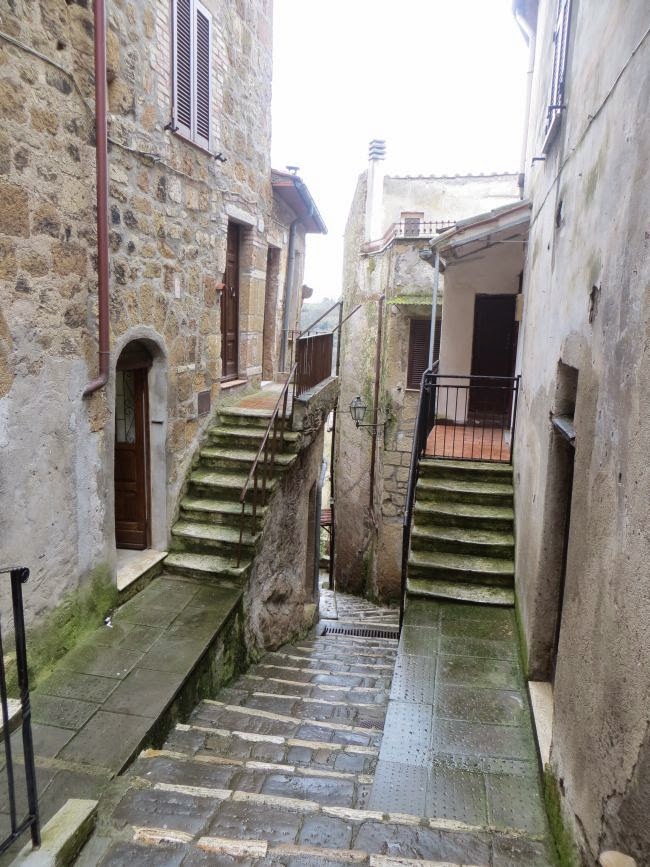 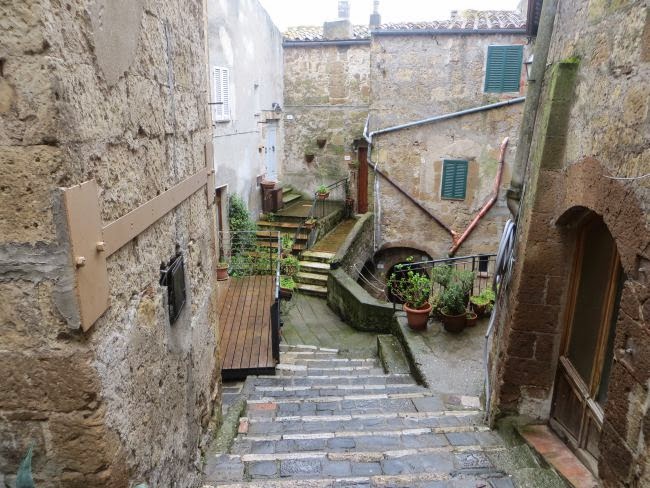 Underneath the Jewish ghetto, one can see the old baptizing bath, the wine cellar, the bakery: 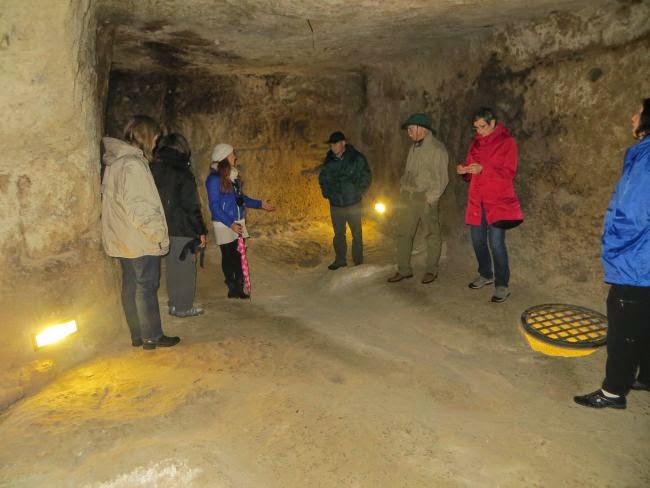 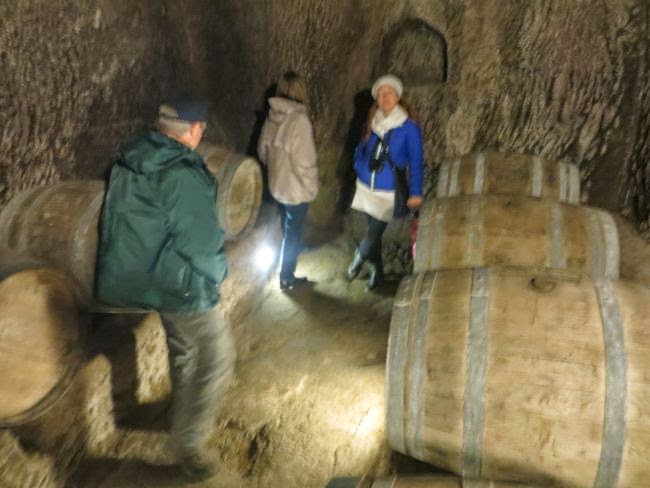 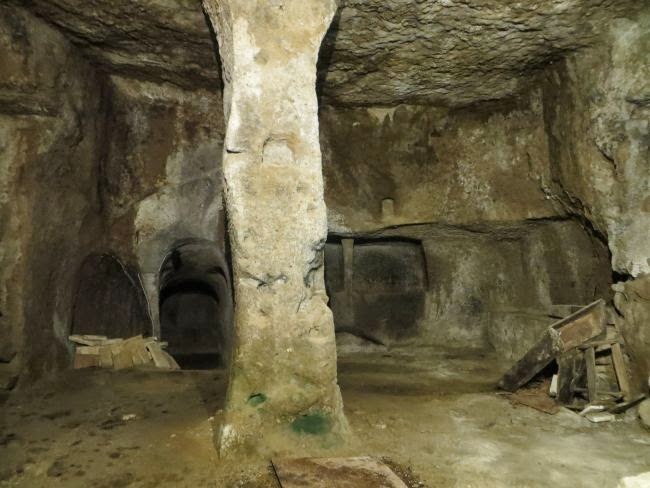 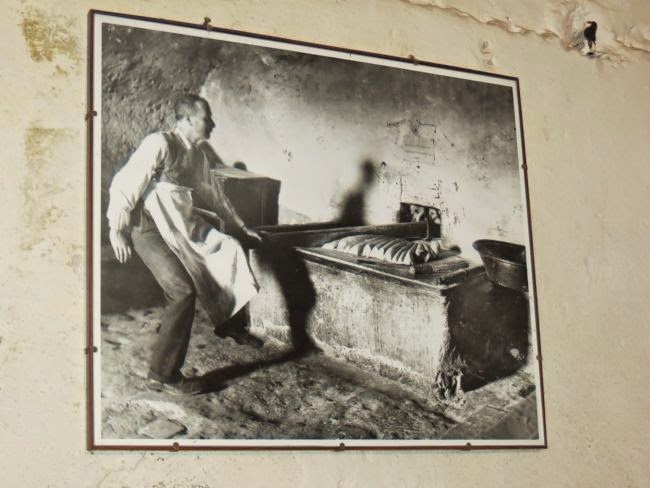 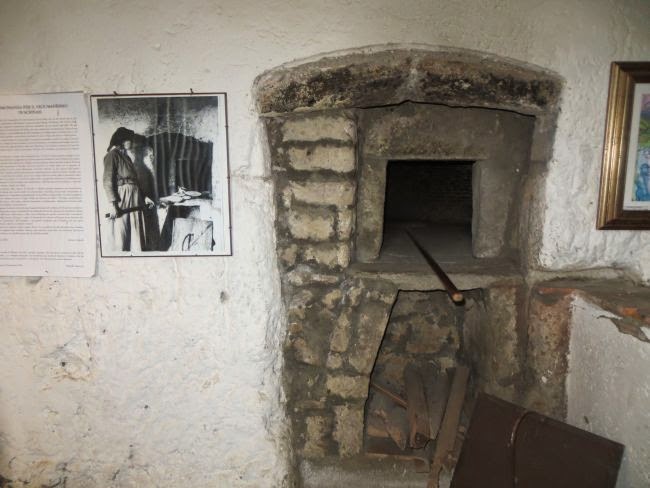 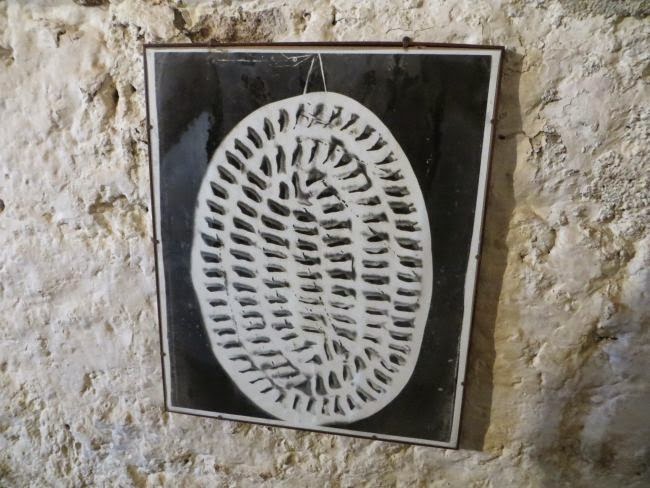 They have a Synagogue, but of course no rabbi any more. 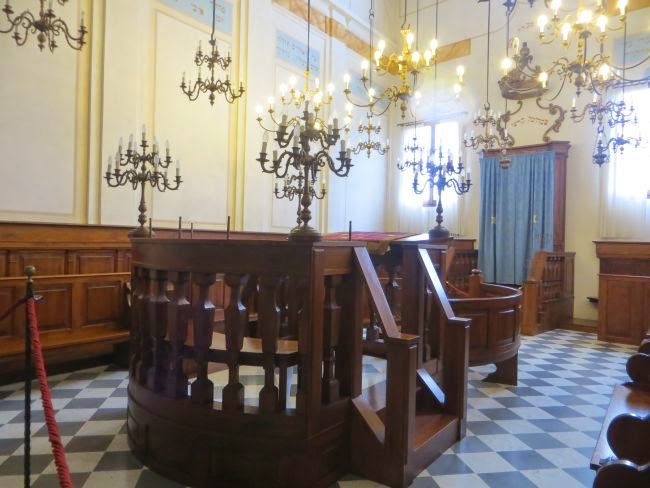 Our mood was quite sober after the visit to the ghetto.  But our guide arranged a nice place for us to have the best zucchini lasagna which cheered us all up.  We all have a lot be to thankful all right. Etruscan had complicated feelings about the under world.  The built stone lions to guard their tombs, devil with wings to protect their soul, and long and curvy path to the tombs....

Here lied a noble lady, her tomb was guided by stone lions and Vanath with wings, a good god of the underworld 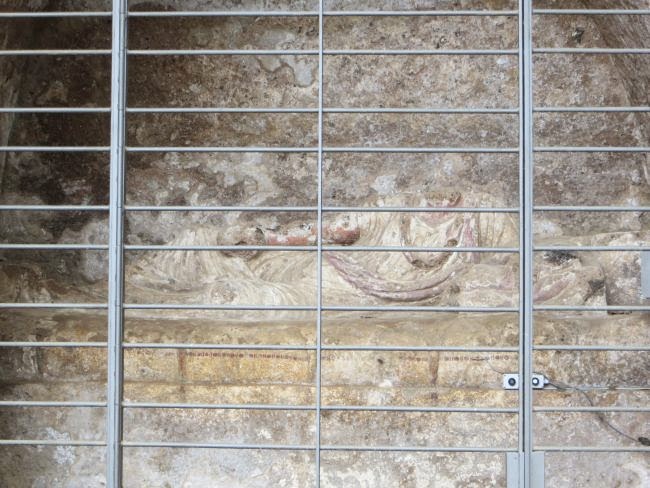 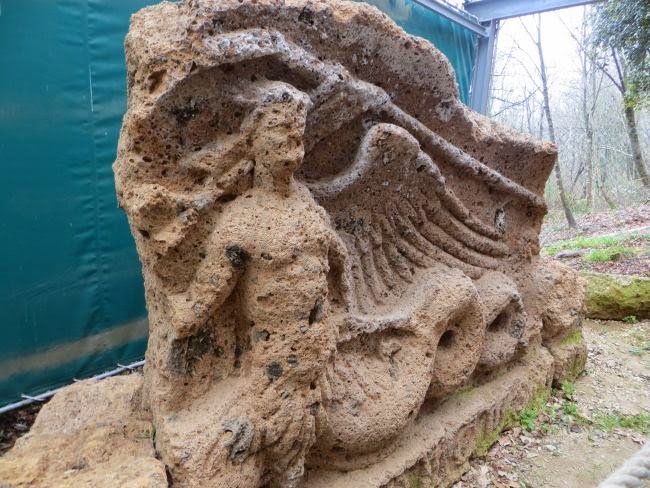 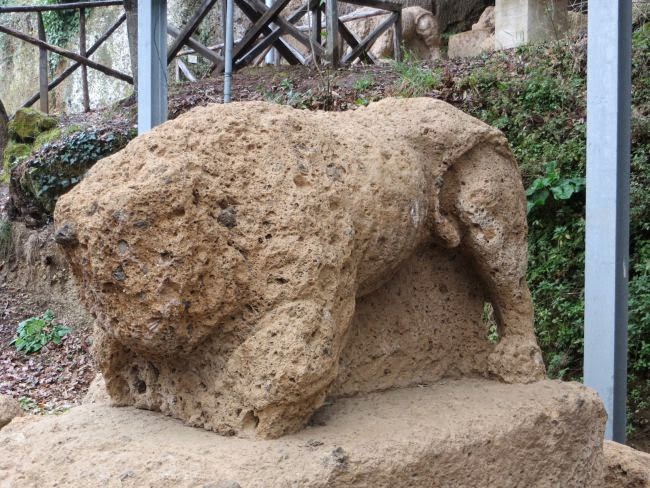 A probably a priest's tomb.  It used to have 12 columns: 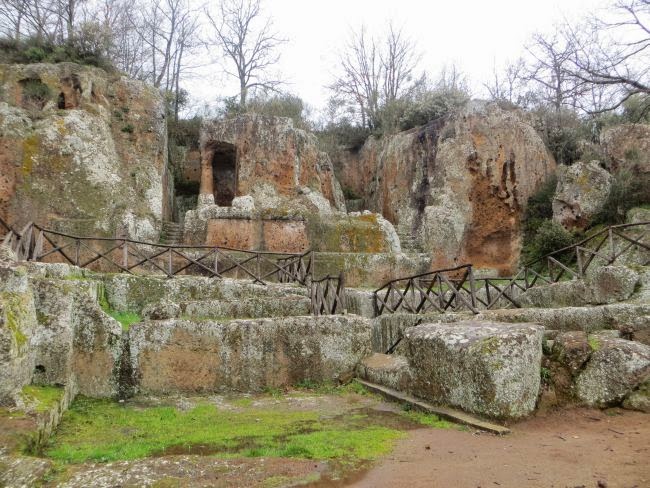 There were also 30 "cave roads" made by Etruscan discovered.  These are winding roads carved out from the cave, sometimes are 70 feet tall.  During the second world war, Partisans used them to hide out from Nazi.  The 1945 was carved out by Partisans. 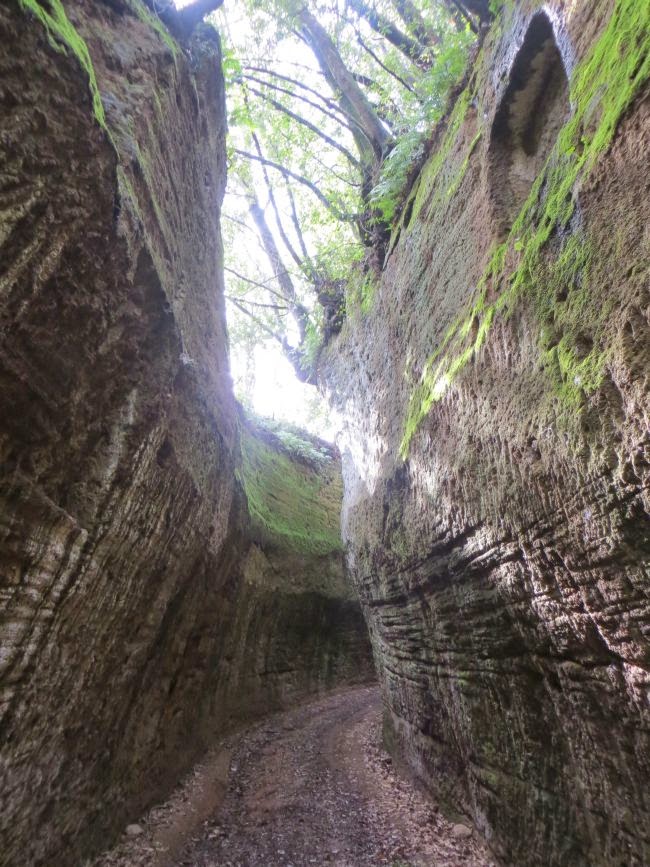 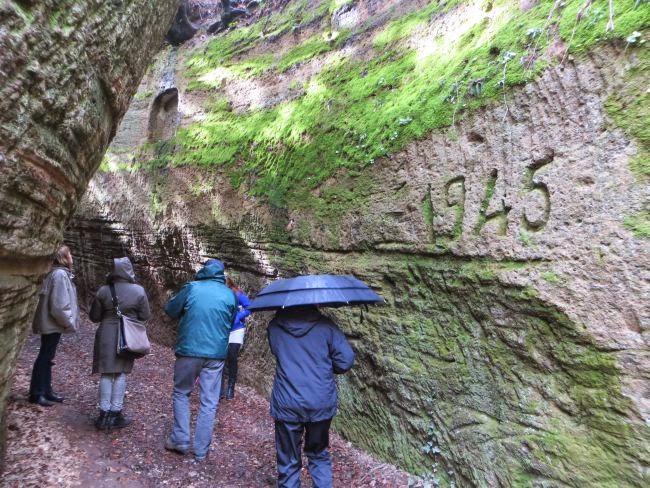 Before heading back to Pienza, we made a short stop at Sovana, another old city dated back to Etruscan era. 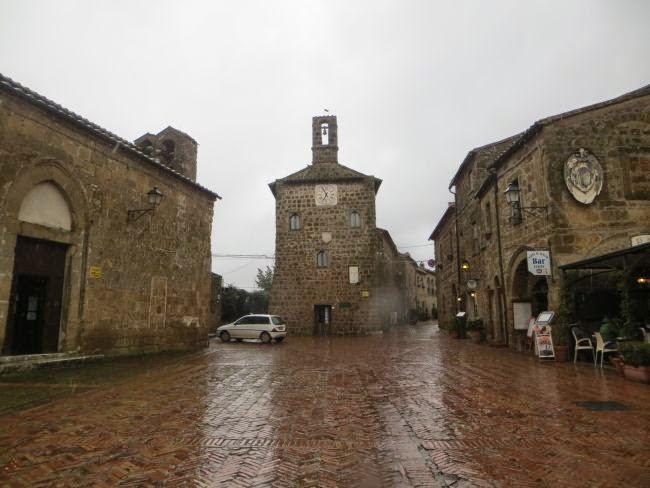 Posted by ChristinaH at 7:34 AM